This cape is the most stately thing and the fairest cape we saw in the whole circumference of the earth -
Sir Francis Drake on seeing the Cape for the first time in 1580.

You don't need a holiday. You need Cape Town. (www.capetown.travel)

Capestop.co.za keeps you up to date of what's happening and what to do in Cape Town.
Please follow us on twitter: @capestop

Summer
Warm, sunny summers are from December to February with longer days (up to 10 hours) and are very popular with local and international visitors. Residents spent summers outside - running, cycling, hiking or visiting markets. During these months the south easter wind cools the city. This strong wind is also known as the Cape Doctor for cleaning air pollution.

Autumn
This is a mild transition season. Autumn is from March to May when temperatures, like the wind, start to drop. Cloudy days with beautiful sunset becoming chilly in the evening. This is the ideal time to visit the wine region of Constantia, Durbanville and Stellenbosch to see the vineyards changing colors from green to brown and orange. 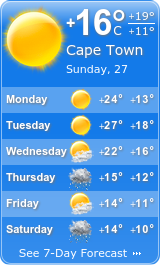 Winter
Colder, wet weather when the days are much shorter (on average 6 hours) are from June till August. Expect less tourist. Some times Cape Town can get stormy. Capetonians spend these days around the fireplace with a glass of local wine. When it is snowing on the Boland mountains we visit Ceres to experience it

Spring
Spring is also a mild transition period. It is from September to November with temperatures getting warmer again. Expect four seasons in one day as weather can quickly change from the morning to evening. This is a good time to travel up the west coast to see the fields of wild flowers or do whale watching in Falsbay & Hermanus.

1488 - Bartolomeu Dias (Portuguese) discovered the Cape after sailing down the west coast of Africa.

Jan van Riebeeck was send by the VOC to establish a halfway station for fresh food and water
(VOC = Vereenigde Oostindiche Compagnie, Netherlands) - 1652

1666 - He started building the Castle of Good Hope (completed - 1679). This is the oldest building in South Africa.

Simon van der Stel replaced Jan van Riebeeck as governor and started the wine industry with grapes from Europe.
The town Stellenbosch was named after him - 1679

1688 - The Huguenots (French) fled from anti-protestant persecution and brought more wine experience to the Cape.
They were accommodated in the area known today as Franschhoek.

The Netherlands was invaded by the French and the VOC began to experience financial problems.
Britain offer to help the Netherlands and eventually invaded the Cape. After the war
it was agreed to return the Cape to the Dutch. - 1795

1806 - The war between the British and the French began again and Britain regain possession of the Cape.

1814 - Britain won the war against the French and took the Cape permanently.

The Green Point lighthouse was built - 1824

1834 - Slaves were emancipated and this led to the establishment of the Muslim community
in the area today known as the Bo-Kaap.

Some Dutch families left the Cape to explore the land further north.
This exodus are referred to as the Great Trek. - 1836

1880 - Cecil J Rhodes became the new prime minister of the Cape Colony and instigated a rapid expansion
of the British influence into the hinterland. Inter-ethnic tension followed that led to the Anglo-Boer War.

The Anglo-Boer war ended when the two parties signed the treaty of Vereeniging. - 1902

1964 - Nelson Mandela arrived on Robben Island where he would spend 18 of his 27 prison years.

1968 - District Six was bulldozed and people were relocated to the Cape Flats as the area was
declared a white only neighborhood.

The first Two Oceans Ultra Marathon (56km) was held and it's known as the world's
most beautiful marathon. - 1970

1990 - Nelson Mandela made his first public speech in decades from the balcony of the Cape Town City Hall.

When the Cricket World Cup was held in South Africa, Newlands was one of the test grounds. - 2003

Table Mountain became one of the New7Wonders of nature. - 2012

ZeitzMOCAA, the largest museum of contemporary African art in the world,
opens in the V&A Waterfront - 2017